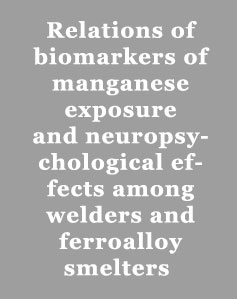 The objective of present study was to assess relationship between biomarkers of Manganese (Mn) and neuropsychological effects. The study was carried out on 27 welders and 31 ferroalloy smelters as Mn-exposed groups and 30 office workers as unexposed controls. Air Mn concentrations were determined according to NIOSH method 7300. The biological samples were prepared using microwave assisted acid digestion and all samples were analyzed by graphite furnace- atomic absorption spectroscopy (GF-AAS) in order to determine manganese. Questionnaire 16 (Q16) and Cambridge Neuropsychological Test Automated Battery (CANTAB) were used to evaluate the neuropsychological effects. The mean concentrations of air Mn for the welder and ferroalloy smelter groups were 0.023 ± 0.012 mg/m3 and 0.008 ± 0.005 mg/m3, respectively. Manganese concentrations in blood, urine, and toenail samples of exposed workers ranged between 1.80–32.60 (μg/l), 1.00–42.50 (μg/l), and 0.10–6.08 (μg/g), respectively. Mean Mn concentrations in all biological samples of cases were significantly higher than unexposed controls (p<0.05). A moderate relationship was observed between biomarkers of Mn exposure, air Mn, Q16 as well as some neurocognitive outcome measures. The present study shows that blood Mn, urine Mn and toenail Mn could be used to distinguish Mn-exposed workers from unexposed population at the group level.

The results of this study showed that the concentrations of Mn in biological samples (blood, urine, and toenail) of both welder and ferroalloy smelter groups were significantly higher than the unexposed-control group.