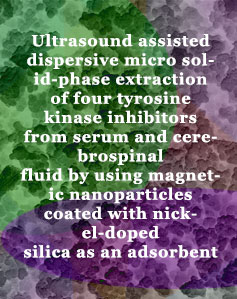 Nanoparticles (NPs) consisting of a magnetic Fe3O4 core and a nickel(II)-doped silica shell were prepared and are shown to be viable materials for selective magnetic extraction of trace quantities of the tyrosine kinase inhibitors (TKIs) imatinib, nilotinib, erlotinib and sunitinib. The NPs were characterized by scanning electron microscopy, transmission electron microscopy, DLS and XRD analysis, and the results revealed a uniform in size (with a typical diameter of 40 nm) and a core-shell structure. The magnetic nanoadsorbent displays good affinity of the TKIs, probably because of the affinity between the Ni(II) ions of the NPs with the nitrogen atoms in the TKIs. The magnetism of the NPs enables them to be quickly separated from serum and cerebrospinal fluid samples. Imidazole, with its higher affinity for Ni(II) than that of the TKIs, was used for desorption of the TKIs from the NPs prior to their quantification by HPLC with UV detection. The detection limits are as low as 200, 480, 130, and 250 ng·L‾1 for imatinib, sunitinib, erlotinib, and nilotinib, respectively. The intra-day precisions (RSDs) were lower than 4.0 %. The method displays a wide linear range. It was applied to the determination of TKIs in (spiked) human serumand cerebrospinal fluid and gave recoveries in the range from 94.6 to 98.6 %.

The authors would like to express their appreciation to the Semnan University Research Council for financial support of this study. The authors also thank Dr. Moazeni (Tehran, Iran, parsianpharma.co) for providing studied drugs.